Digitalization is a journey, not a one-time only project 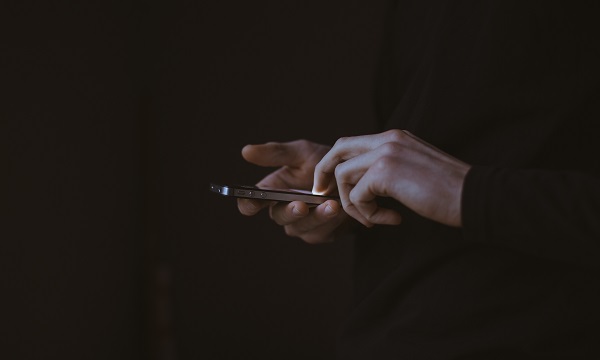 Some of the “shiny new toys” deployed by financial services firms can be style over substance. All mouth and no trousers, as we say in these parts. Michael Stemmle of additive explores some of the classic mistakes companies make when embracing digitalization, including a focus on design rather than experience, and utility over engagement.

I was chatting to a banker friend of mine recently about his organization’s new wealth management app. A massive, year-long endeavour where just the design agency billed over $150k generated an initial spike in downloads. But, to his dismay, the initial enthusiasm all but fizzled out a few weeks later.

It didn’t take long, however, to work out where the problems lay…

It quickly became evident the institution had made the classic mistake of focusing on design rather than user experience.

They wanted a wonderful-looking app, which is why they hired such an expensive agency. Captivated by the polished interface, they neglected the user experience and how the app could empower the user.

The app came out acting like a one-to-one messaging service between customer and advisor, rather than providing the customer with engaging investment ideas and the means to act on them. What’s more, because a committee had worked with the agency, the app was over-engineered, cluttered with features and screens that had no obvious value for the user.

When I asked if the bank had stats on daily and monthly active users, I got a blank look.

Whatever utility the app was providing — insufficient to reach high levels of customer penetration — was not enough to keep users coming back. And that is critical.

The engagement metric is relevant because it feeds into corporate priorities.

My friend told me that his institution could refresh the app because they had invested in software that allowed them to manage the design assets and push updates across different platforms. I pointed out that not only was this commonplace but that it was the wrong focus.

To create tangible value for customers, productivity has to give way to orchestration. By orchestration, I mean the ability to shape and facilitate rewarding customer experience as well as the capacity to make an ongoing digital roadmap operable.

Both require a system that sits separately from customer channels and that can pull in data from multiple systems of record. Only such a system equips an institution with all of the information — contextual, financial, behavioural, risk-related, locational — that allows them to understand the customer well enough. And only by understanding the customer well enough can a wealth manager offer meaningful advice and insight in an engaging way — at scale and at time and place where they can be a truly valued advisor.

We call this orchestration platform a system of intelligence.

Point in time vs journey

In addition to pulling together and analyzing all relevant information, a system of intelligence is architected in such a way — cloud-first, API-first, microservices-based — that it enables an organization to continually adapt its offering and business model to match changing market conditions and customer needs.

To shoot for a beautiful app which you can update quite easily obviously misses a critical point: that customers place greater value on user experience than user interface. Moreover, it misses the even more crucial point that apps are not the end of the customers’ digital journey. 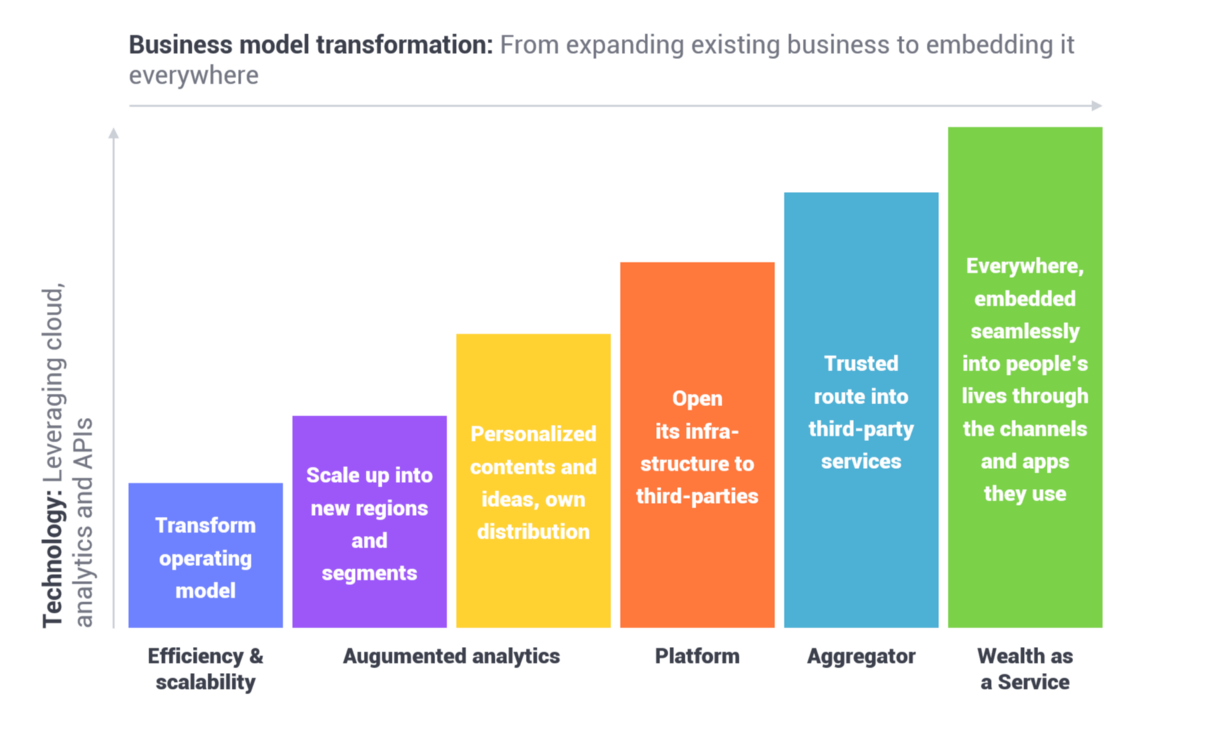 Our world is a state of flux. As a provider of financial services that so many depend on, your system architecture should enable you to respond to rapid change.

For example, even though I think it’s unlikely, many people believe that, over time, the primary digital interface will move from keyboard to voice. In this scenario, how important is a productivity platform for digital apps when compared to a system of intelligence that can map actions to intent?

The key is to maintain flexibility in the face of change. When faced with changing customer expectations and needs, what is important is to respond quickly. An orchestration engine, made up of microservices and frontend agnostic API-first architecture, allows an organization to experiment fast, adjusting user journeys in no time to see if they improve user experience, or launching new services by configuring instead of programming.

And, while not wanting to delve too much into predicting the future it seems relatively safe to assume that banking, like all other industries undergoing digitalization, will become more ecosystem-oriented.

Irrespective of the role an institution plays within its ecosystem (aggregator, platform, long tail supplier), cloud-enabled scale, API integration and interaction, and data driven real-time intelligence — the key properties of a system of intelligence — become much more important.

The end of banking

Alongside these transformations, there’s also the fact that, like technology, banking is increasingly fading into the background as time goes by.

Fritz Lang’s Metropolis — and many other fictional universes — predicted a world where technology became ubiquitous and ever-present. In reality, technology has become ubiquitous and less visible. My iPhone does what multiple, much clunkier devices used to do in the past.

At additiv, we reckon the same scenario will play out in banking.

Today, banking is transitioning from physical to digital — from cards and cash to phones and apps. But, over time, why would it stay like this?

The user experience of simply stepping out of a taxi is superior to fishing out your mobile and scanning a barcode. The user experience of authorizing a bank transfer from within an app you’re already using is better than having to pull up your bank app and do it yourself. It seems inevitable that banking will gradually become built into other services where convenience or engagement are higher.

What does this mean for banks and asset and wealth managers?

Well, one possibility is they become dumb pipes, price-takers at the mercy of big tech. But I harbour a more optimistic outlook. Wealth management is still an industry where trust and expertise carry a lot of weight. What will matter is to be the service of choice even when the customer interacts through a third-party channel.

The key to achieving that?

Convenience and engagement or, in other words, customer experience, not customer interface. And building this on an orchestration platform that is API-first, and therefore front-end agnostic and omni-channel by design.

(Apologies to my friend if he reads this, but there isn’t anything I mentioned here that I didn’t already tell him!)

Author: Michael Stemmle, CEO & Founder, additiv
Long-term consulting activity with a focus on the development and implementation of business, sales and distribution strategies for the financial and insurance industries.

This article was first published on the additiv website in August 2020.

Photo by Gilles Lambert on Unsplash 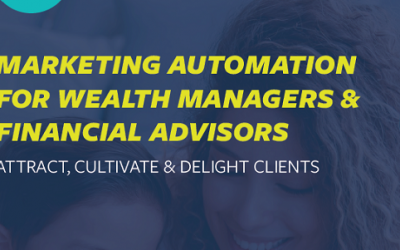 For your wealth management company to survive, you need sales. But to really make it thrive, you need people to love your brand. Marketing automation tools can help you create unique, tailored brand experiences that nurture that vital customer engagement – even with a... 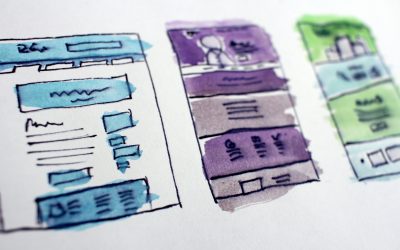 Today’s clients have a big appetite for elevated brand experiences, they expect to receive personalised messaging at the right time through the right channel. It’s up to today’s financial organisations to push the boundaries of creativity and serve up campaigns that... 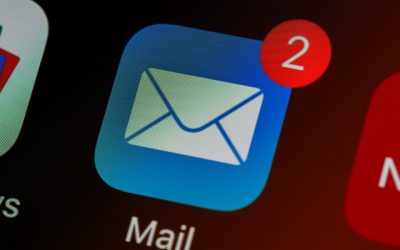 The pace of digitisation of marketing shows no signs of slowing. An increasing number of technologies are forming part of the marketing stack for companies in the financial sector. One of the main problems derived from this “technification” of marketing lies in... 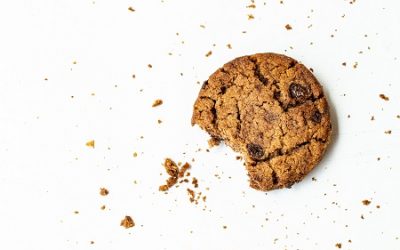